Websites do not have full control over cookies that may set by various third-party scripts. To see detailed information about and to manage cookies in your browser, please check its privacy settings.

These tools are used to collect statistics about user behaviour that helps us to improve our website and services. No personal data are collected.

Currently none in use.

Currently none in use. 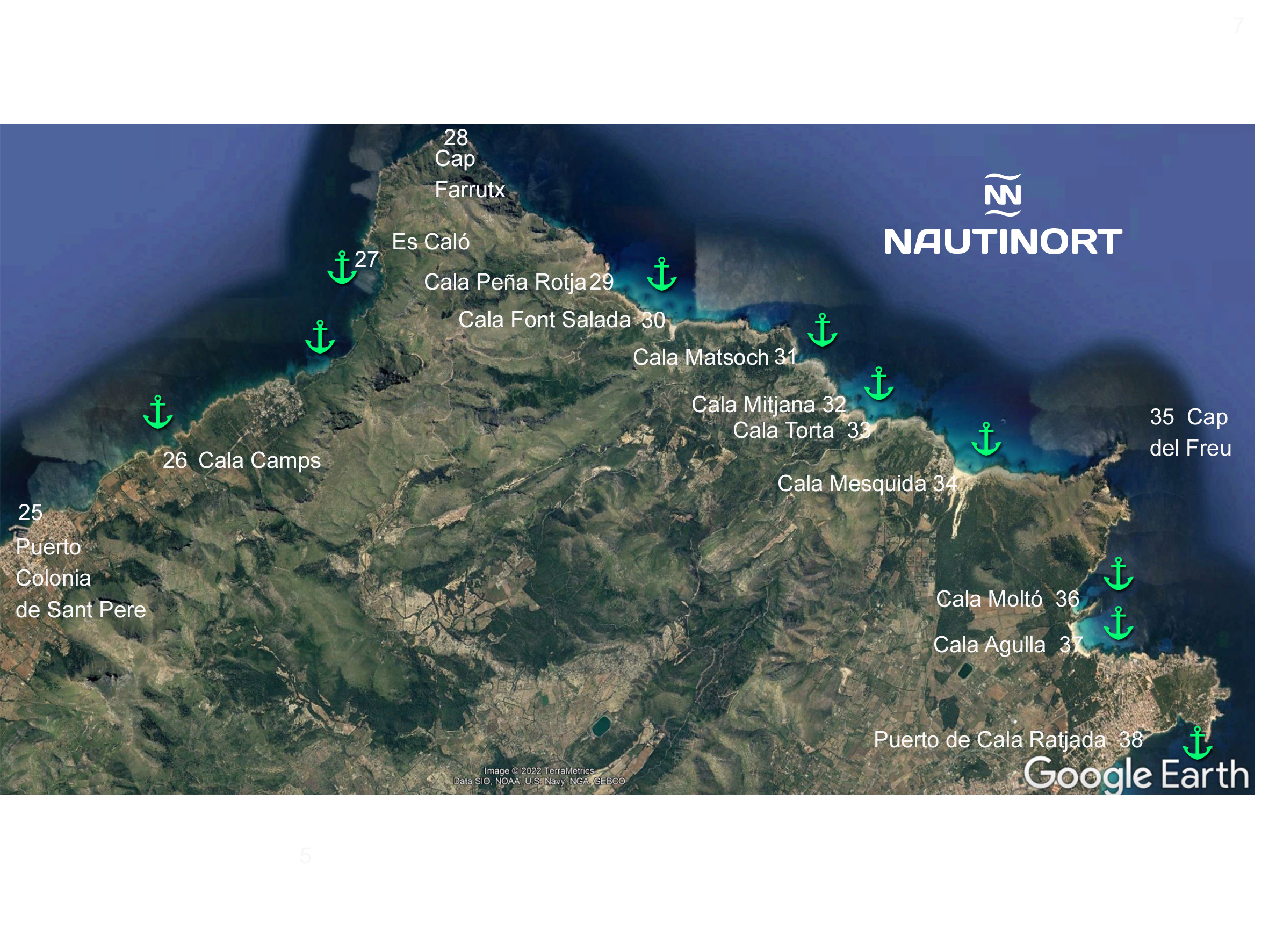 The Club Náutico de la Colònia de Sant Pere (25) is a non-profit organization that since 1968, manages the port facilities located in the municipality of Artà It is located to the East of the Bay of Alcudia, within the "Parc Natural de Llevant", with its beaches and virgin coves, where you can enjoy nature in its purest state, as well as the tranquility of the fishing village of Colonia de San Pedro. The beach of Colonia de Sant Pere, Calo los Ermitaños, Calo des Camps, etc., represent the main attraction, thanks to the sandy beaches and pebbles that are friendly and safe. It has a port of call, a marine warehouse, a gas station and a green point for collecting urban and hazardous waste. GPS position 39º 44,18' 85" N 3º 16,29' 30" E, 15,47 miles from our dock. Estimated speed of arrival at 22 knots - 42 minutes.

Cala Camps (26) is a coastal corner that results from the combination of the mouth of Torrent dels Cocons and the marine erosion that have given rise to a fossil dune inlet in the form of uve. This beautiful virgin beach has a slope of medium inclination, boulders, a background of stones and the presence of tamarinds close to the shore. Also noteworthy in its slope are the presence of various escarses (varadero), as well as a defensive nest of Civil War machine guns. From this cove, the coast shows more peeled and very trimmed. This beautiful coastal corner is located halfway through the urbanization Betlem and Colònia de Sant Pere. In a nearby forest is the prehistoric site Talaoits de Can Pa amb Oli (bread with oil) which refers to a dish of popular Mallorcan cuisine, consisting of a slice of loaf bread on which a tomato is rubbed and oil is added). GPS position 39º 45,30’ 49” N 3º 19,23’ 63” E, 15,45 miles from our dock. Estimated speed of arrival at 22 knots – 43 minutes.

Es Caló (27) What most draws the attention of this cove is its rock bridge that makes it a must. In addition, sometimes you can practice climbing on this bridge. If you want to anchor here it is especially simple since it was used as a natural port for a long time for its excellent conditions that still preserves. It is a virgin cove with a small sandy beach. Its water is usually very calm and crystalline. The calm and genuine nature of its surroundings make it the perfect place to have a good time and disconnect from stress.  GPS position 39º 46,24’ 46” N 3º 20,02’ 15” E, a 15 miles from our dock. Estimated speed of arrival at 22 knots – 42 minutes.

Cap Farrutx (28) is located in Alcudia bay near the towns of Colonia de Sant Pere and Betlem. It belongs to the marine reserve of the coast of Levante. The coast is formed by numerous cliffs of calcareous origin that form underwater caves. The coastline combines rocky areas with fine sandy beaches, some of them considered virgin. The seabed of the reserve is varied and of great ecological and fishing value. The northwestern area of the reserve is characterized by the uniform presence of an extensive and leafy meadow of Posidonia oceanica. GPS position 39º 47,22' 89" N 3º 20,50' 76" E, 14,72 miles from our dock. Estimated speed of arrival at 22 knots - 42 minutes.

We use our own and third-party cookies to improve our services, compile statistical information and analyse your browsing habits. This allows us to customise the content we offer and to display advertising related to your preferences.
Accept How to configure